WHILE there is no ‘live’ athletics activity at the moment – plenty of virtual running though thanks to Vicki - here is a brief report from the Durham Pine Harrier League fixture of 20 years ago. It was the first season of the coming together of the men and women as previously the women would more often than not hold their fixtures on the Sunday, following on from the men’s event at the same venue the previous day. 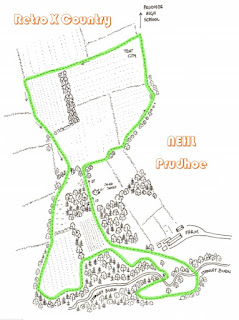 Even though I was in attendance at Prudhoe that day – can someone enlighten me why it was on a Sunday - please excuse the fact that in some cases I don’t know the Christian names of some of the athletes! – feel free to add them if you can.

IT’S only right to kick off with the senior women’s race for it was won by the promoting club’s – Tynedale Harriers - Karen Robertson, and even though there was no pack system at the time, managed to win by over a minute with Scottish Commonwealth Games marathon representative Lynn Harding (now Cooper and the NECAA cross-country team manager) finishing in second place ahead of Jarrow and Hebburn’s Clare Smallwood (now Simpson). Compared to the huge women’s fields now witnessed at harrier league fixtures on this occasion, I don’t know how many dropped out because of the severity of the course, but the results state that only 21 managed to finish.

On a pleasing note however, it’s good to see that the leading three athletes home are still involved in the sport we all love. 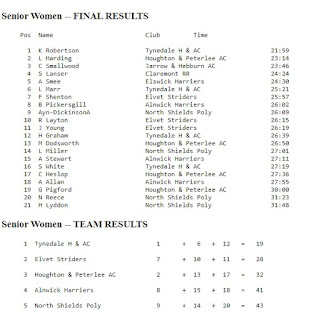 The under-17/20 women’s race attracted just 11 competitors and was won by Gateshead’s Claire Taylor (formerly North Shields Poly). L Davies of the Poly finished runner-up while Tynedale’s L Wallace completed the one-two-three. Only one under-20 athlete was involved with Angela Hunter (now McGurk) of Jarrow & Hebburn, finishing in fourth place. 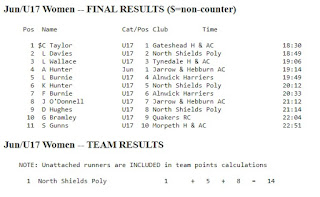 The under-15 girls contest, which had 15 competitors, was won by Tynedale’s H Pearson with Blaydon’s N Batey in second position and Danielle Watts (Morpeth) finishing in third place. A young Danielle Hodgkinson (Wallsend) finished half-way down the field over a minute adrift of the winner. 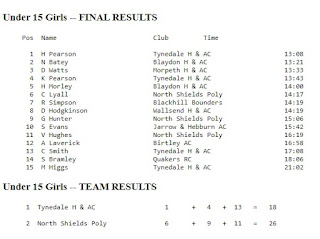 The under-13 girls event had 31 finishers with representatives from 12 of the region’s clubs. First across the line was Julia Orr (Quakers) who had four seconds in hand over second-placed Emma Nesbitt of Morpeth with Birtley’s A Barter holding off Gosforth’s Joy Fenwick for third place. 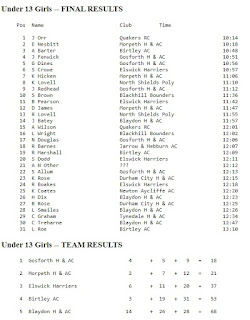 The senior men’s course must have been short of 10km on this occasion for first home in a time of 30min 53sec was Crook’s Kevin Archer who crossed the line over a minute-and-a-half clear of Morpeth’s Stephen Munday who, like third-placed J Bent (Blaydon) ran from the medium pack. First fast-pack runner home and quickest on the course, was Jarrow and Hebburn’s Kevin Corr who, from a five-minute handicap, worked his way through the field to finish in 11th place.

There were 201 finishers and, as he has done on many occasions since, George Routledge (Heaton) was last man home! Also amongst the finishers that day were Blaydon’s Bill Courtney in 79th place and following him across the line was the current Start Fitness Harrier League sponsor’s owner, Tony Wallett of North Shields Poly. 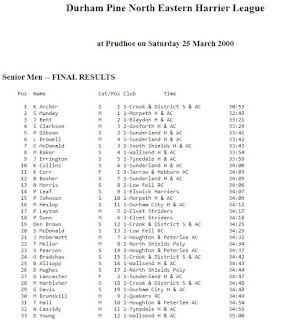 Only 13 competitors lined up in the under-17 men’s event with victory going to A Hudson of Durham City who crossed the finish line 20 seconds ahead of second-placed fast-pack runner R Smee (Elswick,) with Quakers’ C Bedford, also from the fast pack, 13 seconds further adrift in third spot. Despite the small field, two clubs managed to close in a three-to-score team with North Shields Poly totaling 23 points to Quakers’ 24! 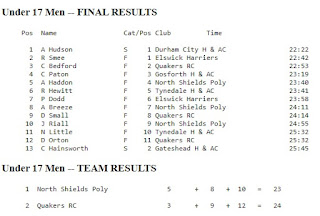 The under-15 boys’ race with 24 competitors, was won by Blaydon’s Matthew Armstrong who held off the challenge of fast-pack runner Marc Elliott of Gateshead by 15 seconds. Also running from the fast-pack was third-placed S McCarthy (North Shields Poly) who crossed the line just five seconds behind Elliott. Gosforth won the team race led home by Drew Graham in fourth place. 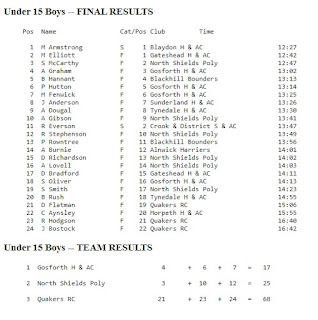 The under-13 boys’ event attracted 43 competitors and it was the only triumph for a fast-pack runner with Nathan Shrubb (Wallsend) managing to cross the line five seconds clear of his rivals. Elswick’s Jonny Pearson finished runner-up while Nick Swinburn, then of Blaydon, claimed third place ahead of Gosforth’s Lewis Timmins. Pearson and Swinburn ran from the slow pack while Timmins was a fast-pack entry. 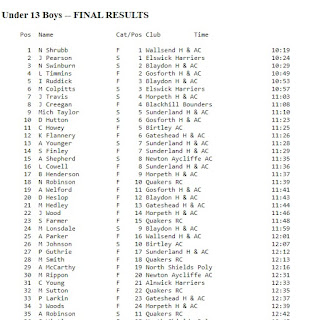 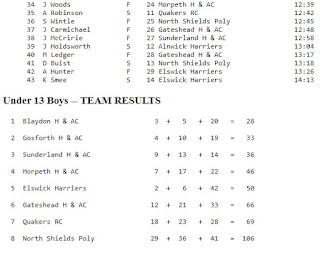 The harrier league has come on leaps and bounds since that day thanks to the leadership of a series of hard-working committees and while the sport is in limbo at the moment with the present team at the helm it is sure to move up another notch as soon as they get the ok.

Roll on next season – bring on the mud!