MAGICAL DAY FOR THE WIZARDS OF WALLSEND

AFTER a number of false starts the Start Fitness North East Harrier League eventually got back on track with the annual fixture hosted by Alnwick Harriers under the beautiful backdrop of Alnwick Castle. 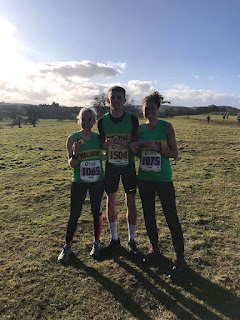 And it turned out to be welcome return to action for around 1,000 eager competitors relishing the challenge of the Northumberland hills, strong winds, an occasional heavy shower and, of course, the inevitable mud patches though they were no way near the conditions for those who lined up in the National the previous weekend in Nottingham.
While there was plenty to smile about at the end of the day – plenty celebration cakes as well - for Wallsend Harriers it was exceptional for first home in the senior women’s race was Alex Hemsley while Sam Charlton showed a clean pair of heels to his rivals to come out on top in the senior men’s contest which meant a double celebration at the end of the day for the green and golds. 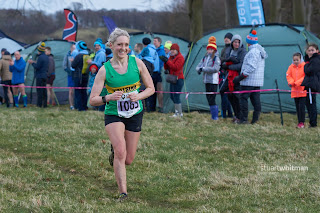 Alex Hemsley defied logic by leading throughout the five-mile contest in what was her Harrier League debut. At one stage the Wallsend athlete resembled a scared rabbit as she took an early lead which she extended with every stride and by the midway stage was nearly a minute clear of Heaton’s Rachel Barnes with Alnwick’s Lisa Baston following behind just ahead of Ponteland’s Ray Smedley. Going out into the country for the final time Alex showed no signs of giving up the advantage though the leading medium and fast pack runners were making inroads into her lead. However, the advantage was too great for her to be caught and at the finish she had extended her lead to nearly a minute-and-a-half over Rachel as Alex’s team-mate Jennifer Berry had worked her way into third place running from the medium pack as fast-pack runner Danielle Smythe (Heaton) followed her home in fourth place from the fast pack to post the quickest time of the day. 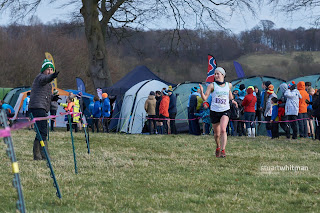 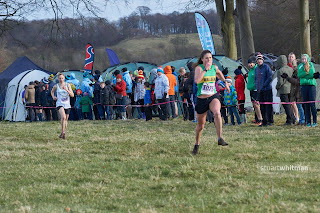 Morpeth, led by Jane Hodgson in fifth place, won the Division One team race ahead of Heaton and Tyne Bridge while Wallsend, bidding to reclaim a top division place for next season, topped the Division Two scorings ahead of Durham City and Jesmond Joggers. Newcastle University won the Division Three team race followed by Ponteland Runners and Claremont.

SENIOR MEN
Three 2.8-mile laps faced the 350-strong field and it was Newcastle University’s Jack Douglas who quickly opened up a significant advantage on the first circuit and when he crossed the starting point to go out for a second time he had a 12-second cushion over Sunderland pair Nathan Reed and Michael Edwards who were determined to keep the Wearsiders’ title challenge on track. Birtley’s Andrew Beevers was next followed by Durham City’s Will Lindsey, all five taking advantage of the two-and-a-half and five minutes start respectively over the chasing medium and fast packs. 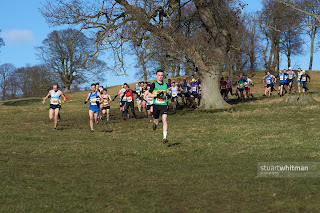 Things changed slightly as the athletes came into view for a second time before setting off on the final lap. Wallsend’s Sam Charlton, running from the medium pack, had eased into the lead by a few metres with Douglas in a comfortable second place ahead of the Sunderland duo who were still running shoulder-to-shoulder in third and fourth, Beevers was fifth and Lindsay sixth as Newcastle University’s Chris Larkin was cutting through the handicap from the fast pack just outside the top 20.

On the final lap Charlton, who was having his first cross-country race – his first as a senior athlete - since the North Eastern Counties Championships upped the tempo all the way to the finish to ease across the line over a minute-and-a-half ahead of Douglas as Reed eventually got the better of team-mate Edwards to claim the third-place award. Claremont’s Kris Axon, running from the medium pack, finished fifth with Charlton’s university team-mate Larkin, winner at Aykley Heads before Christmas, completing the top six. Charlton proved to be the fastest on the course with Larkin second quickest with Gateshead’s Conrad Franks next fastest after working his way through the field to finish in 10th place. 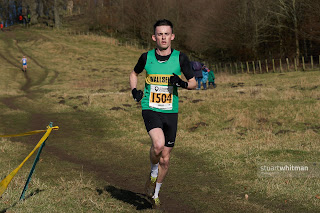 Charlton, who last year swept the board both locally and nationally, at under-17 level was pleased with his performance as he bids to retain his English Schools’ title in Liverpool in two week’s time.

“I have to be happy with that for I didn’t really know what to expect after being out injured since the North Easterns,’’ said Charlton immediately after the race. “I’ve had to miss out all of the championship races this winter due to a knee injury but thankfully, things are looking much better now. The plan was to go hard on the first lap, ease off on the second, then, if everything was ok, push on again on the third lap. I think I got carried away a bit on the second lap but everything is coming together before defending my schools’ title after missing out on so much training that is logically the one to go for as it gives me the most time to get as close to 100% fit as possible.’’ 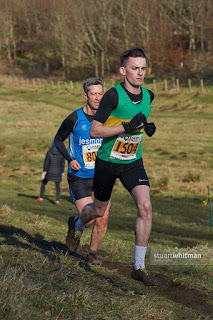 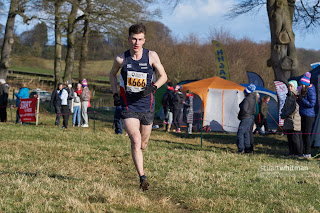 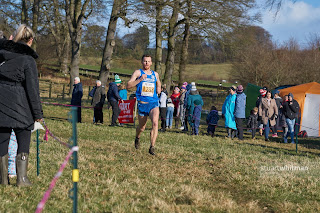 Sunderland duly won the Division One team race ahead of Wallsend with Gateshead in third place while Gosforth came out on top in Division Two ahead of Birtley and Ponteland as Houghton led the way in Division Three ahead of Jesmond Joggers and Blyth.

UNDER-17/20 WOMEN
Tess Graham (Birtley) and Blaydon’s Cecilia Reid worked their way through the field from the medium pack to claim first and second places respectively with Tess getting the verdict by four seconds. The pair were followed home by Morpeth’s Sophie Coaker and Elswick’s Emily Allison. The leading four finishers were all contesting the younger age group while Chester-le-Street’s Ella Duffield, who finished in fifth place, was the leading under-20. In a tight team race, Blaydon came out on top by finishing just one point ahead of Elswick with Morpeth a close up third. 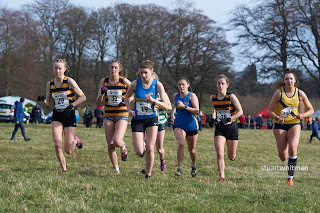 UNDER-17 MEN
Morpeth’s Dylan Gooding led throughout to claim a comfortable victory running from the slow pack. Gateshead’s Jack Garrett held second place before being caught in the closing stages by Houghton’s Samuel Gibson, who, after giving 2min 5sec start away, was rewarded with the fastest time of the day. Garrett held onto third place finishing just four seconds ahead of Sunderland’s Alexander Seed who just held off the fast-finishing Dylan Davies (Morpeth) who was rewarded with the second fastest figures behind Gibson. Gooding led Morpeth to team victory finishing ahead of Houghton and Sunderland. 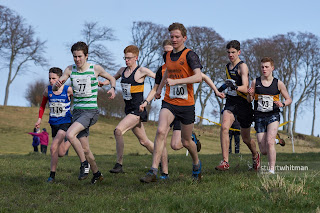 UNDER-15 GIRLS
Birtley’s Katie Francis defied a 1min 40sec handicap to wind her way through the field to finish in pole position. Alnwick’s Ellie Price was a long-time leader but was caught close to home so had to settle for the runners-up award. Gosforth’s Alice Lewis finished third with Millie Breese (Alnwick), with the second fastest time of the day, crossing the line in fourth position. Alnwick won the team contest finishing comfortably ahead of Blackhill Bounders and Birtley. 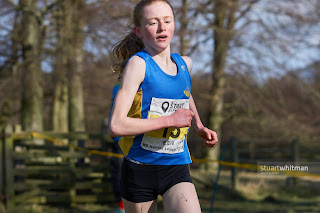 UNDER-15 BOYS
Chris Perkins bounced back in the most positive way after his third place in last weekend’s National Championships in Nottingham. The Birtley athlete, like team-mate Kate Francis, defied a 1min 40sec penalty to come home in pole position. Unfortunately, Matthew Burton (South Shields) who had led for most of the way, was disqualified for having run from the wrong pack. Blaydon’s Joseph Lonergan crossed the line in third place closely followed by Morpeth’s Ryan Davies who was rewarded with the second fastest time of the day behind Perkins. Morpeth won the team race finishing ahead of Gosforth and Sunderland. 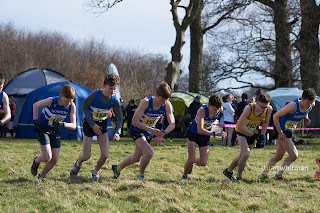 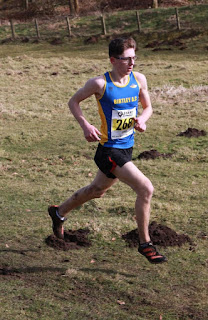 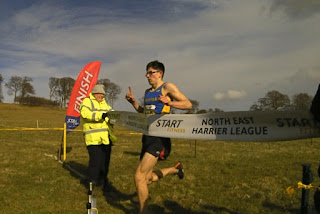 UNDER-13 GIRLS
The first seven home all defied a 1min 40sec handicap with victory going to Durham City’s Charlotte Dillon who won comfortably by 45 seconds to finish ahead of Billingham Marsh House’s Sophie Quinn with Elswick’s Poppy Wilde crossing the line in third place a further 11 seconds adrift. Gateshead came out on top in the team race with Gosforth second and Elswick third. 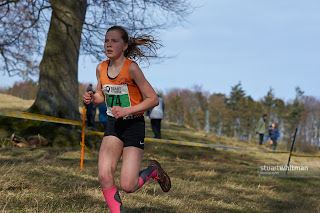 UNDER-13 BOYS
The first three home took advantage of a 1min 40sec start to claim the awards. Victory went to Durham City’s William Jardine who finished 25 seconds clear of Houghton’s Thomas Pigford with Sam Livingstone (Morpeth) a further 31 seconds behind in third place. Fastest on the course was Gateshead’s Theo Dragoi who managed to weave his way through the field to finish in fourth place. Morpeth came out on top in the team stakes finishing ahead of Gateshead and Birtley. 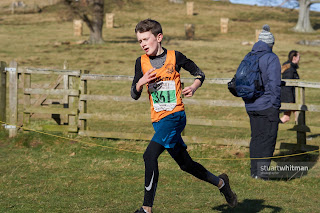 UNDER-11
Once again the ‘Try Cross-Country’ runs are proving extremely popular with 47 lining up in the girls event and 56 in the boys contest. In the girls competition it proved to be the closest race of the day with the timing system unable to split Millie Moat (Gosforth) and Durham City’s Grace Carter with the judges deciding that Millie was fractionally ahead at the line. Blyth’s Niamh Adams led the charge for third place just four seconds behind the leading duo. 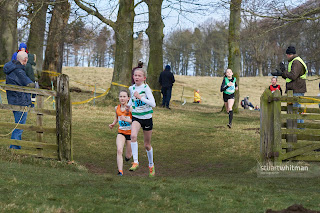 It was a similar situation in the boys race with the leading pair, Gateshead’s Alex Lienard and Rob Walton (Morpeth) both being given the same time as they crossed the line. Once again a difficult decision for the judges but Alex was given the verdict as Birtley’s Noah Williamson claimed the third place medal. 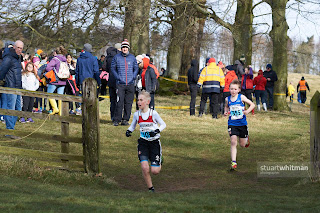 *Grateful thanks go to Alnwick Harriers for going about in their unflappable way to give competitors the chance of a great day’s sport. On the back of hosting the North Eastern Counties XC  Championships in December once again everyone involved did a superb job.