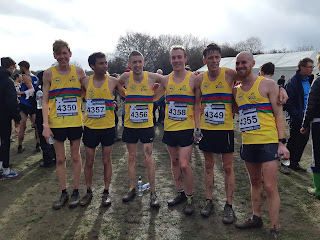 ANOTHER muddy marvellous day for the region’s athletes competing in the British Athletics Inter-Counties Cross-Country Championships at Prestwold Hall, Loughborough.
And, capping a fine overall performance, on the final event of the 10-race programme the North Eastern Counties senior men’s squad claimed an unexpected gold medal after team manager Stewy Bell had to bring in three athletes due to late withdrawals from the original line-up.

While topping the podium came as a huge surprise it was equally so for the senior women who claimed third-place earlier in the day led home by bronze-medallist Philippa Williams.

That came about despite team manager Lynn Cooper losing both Sonia Samuels and Philippa Stone, first and second in the North Eastern XC Championships!

In the age group races Middlesbrough Mandale’s Josh Cowperthwaite finished runner-up in the under-20 men’s contest while Birtley’s Chris Perkins did likewise in the under-15 boys event.
As well as the medal winners there were many other fine performances throughout the day which augurs well for cross-country running here in the North East.

UNDER-20 MEN (8km)
THE first event of the day saw junior international Josh Cowperthwaite (Middlesbrough Mandale) set the standard for the region by finishing runner-up behind Kent’s Matthew Stonier. Josh, who finished in third place last year, was always in contention at the head of affairs forcing the pace along, not afraid of taking up the running. However, going into the final kilometre the South of England champion managed to ease ahead to claim victory by seven seconds. Josh finished a clear second a similar distance ahead of Henry McLuckie (Hampshire). 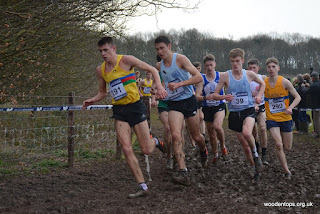 Next home for the NE was Morpeth’s Ross Charlton, a recipient of a recent Sport Newcastle Award for his tri-athlete exploits, who had a superb run to finish in 20th place out of a near 200-strong field. Ross’ Morpeth team-mates Daniel Melling and Daniel Dixon made up the team’s scoring four in 31st and 38th place respectively, Daniel Melling getting his pace right on this occasion.


UNDER-13 GIRLS (3km)
OVER 300 athletes faced the starter with Middlesbrough Mandale’s Eden Creasey the pick of the North East team. The Teessider, runner-up in the Northern XC Championships and seventh in the National, finished in 15th place. NE Counties champion, Darlington’s Zara Jones, was next home for the region finishing in 31st position, five places ahead of Durham City’s Charlotte Dillon. Billingham Marsh House’s Sophie Quinn, one of the youngest in the race, completed the scoring quartet in 36th place. Once again, the total of 139 points was only good enough for fourth place in the team section out of the 40 counties who closed in. The team’s non-scorers were: 147 Annabel Milburn (Gateshead); 174 Annie Hutchinson (Gosforth); 178 Poppy Wilde (Elswick); 208 Poppy Old (Elswick).

SENIOR WOMEN (10km)
THE 300-strong field faced 10 kilometres for the first time bringing the distance in line with the men and it was the North East’s Philippa Williams who led the charge in the early stages with two-time European XC Championship runner-up Kate Avery (Shildon) also in contention in the leading group. Philippa, a former Elswick athlete and making her county debut as a senior, now competes for Sheffield RC but has NE qualification due to birth, kept pushing the pace on until she slipped back in the closing stages to finish in third place.

It was an excellent performance by Philippa who has gained numerous representative honours as a fell runner as well as winning the Sunderland Half-Marathon (76:41) last year, was suited by the tough Loughborough conditions. Kate, meanwhile, one of the pre-race favourites, was quick to congratulate her NE team-mate after crossing the line in fifth position exactly a minute behind the bronze medallist. While disappointed with her performance Kate still came out on top of the British Cross Challenge earning a nice cheque for her outings over the season.

Morpeth’s Catriona McDonald, opting to represent the NE rather than her native Scottish region, was next home in 41st place – 106th last year - with Darlington’s Hannah Plaschkes next in 55th. Gateshead’s Gillian Manford, like Hannah, making her senior debut in the Inter-counties, was next home in 68th place with Jarrow and Hebburn’s Georgia Campbell closing in the six-to-score team race in 74th spot. It was time for celebration when the team realised they had totalled 246 points which earned them third place on the podium. The team’s non-scorers were: 103 Amy Fuller (Elswick). Unfortunately, Heaton’s Danielle Smythe pulled out injured when going well.

(The distance ran turned out to be well over 11k)


UNDER-15 BOYS (4km)
BIRTLEY’S Chris Perkins completed a full set of medals with a superb second place behind big rival, Suffolk’s Lewis Sullivan. Having won the Northern and finished third in the National Chris added a silver medal to his collection with a determined effort that saw him come home just eight seconds behind the winner.

It was a great effort by the youngster making up for the disappointment of two years ago when he just missed out on a podium place in the under-13 age group after crossing the line in fourth position.

UNDER-17 MEN (6km)
ARCHIE LOWE (Middlesbrough Mandale) made a brave effort to make it onto the podium but missed out by a matter of just 11 seconds. The Teessider was in contention throughout but at the end of a grueling encounter Archie had to be content with fourth place, a disappointing position to finish after working so hard. Gateshead’s Ethan McGlen showed a good return to form to finish next counter in 21st place with team-mate Charlie Daley next home for the NE in 53rd place followed by recently-crowned 3,000m indoor champion, Henry Johnson (Houghton) in 61st place. The team total of 139 points slotted the NE into seventh place. The team’s non-scorers were: 66 Rowan Bennett (Morpeth); 91 Dylan Gooding (Morpeth); 96 Will Bellamy (Houghton); 102 John Russell (Darlington). Gateshead’s David Race finished 67th.

UNDER-13 BOYS (3k)
IT certainly was a baptism of fire for the region’s youngest, most of whom were competing on the biggest cross-country stage ever. Perhaps many of the team were overcome by the occasion as North East and Northern champion Alex Bowyer (Darlington) could only finish in 51st place. Second counter for the NE was Gateshead’s Theo Dragoi in 95th position. Gateshead’s Matthew Das and Harry Lyons (Darlington) closed in the scoring four in 132nd and 141st places respectively. The team finished 24th. The team’s non-scorers were: 163 Oliver Tomlinson (Morpeth); 214 Matthew Downs (New Marske); 219 Ethan Marron (Middlesbrough Mandale); 249 Zac Brannon (North Shields Poly).

UNDER-20 WOMEN (6km)
IN her first year as an under-20 Gateshead’s Chloe Wellings ran superbly to finish 17th and first counter for the NE which reflects a huge improvement on last year’s run as an under-17 where she finished 93rd and out of the team’s scoring four. Houghton’s Eva Hardie was next home for the NE in 55th place followed by Amy Baker (Gateshead) in 63rd position. Birtley’s Eve Southern closed in the scoring quartet in 87th spot to give the team a total points score of 222 for ninth place. The team’s non-scorers were: 97 Laura Havis (Middlesbrough Mandale); 104 Eve Quinn (Sunderland); 120 Kirsty Duffin (Morpeth).


UNDER-15 GIRLS (4km)
THE course had cut up badly with long muddy patches in evidence for the penultimate race of the day and it was Alnwick’s Millie Breese who led the region’s charge to finish in 32nd place exactly a minute adrift of a podium place. Houghton’s Erin Keeler-Clarke was next home in 48th position followed by Birtley’s Katie Francis in 57th place with Darlington’s Marissa Boon closing in the team in 70th position to give the team a total of 207 points for 11th place. The team’s non-scorers were: 79 Abigail Leiper (Morpeth); 91 Jessica Milburn (Gateshead); 125 Lucy Scothern (Chester-le-Street); 200 Holly Waugh (North Shields Poly).


SENIOR MEN (10km)
IT’S always nice to end the day on a high and that certainly was the way it turned out for the team and the many supporters who had stayed behind to give the athletes their support. The squad’s chances of making it onto the podium were badly hit by three withdrawals from the original nine. However, the rookies who came in did a superb job in backing up the regulars in the team. With newly-crowned National champion Callum Johnson (Gateshead) in the team anything could happen and it certainly did. Callum had been under the weather leading up to the race and it wasn’t until 48 hours before the off that he gave the team management the nod that he would definitely be on the start line.

Once the race got underway Callum could be seen just off the leading bunch of five or six. It was always going to be a big ask for a repeat of his Nottingham performance but the Geordie boy is made of strong stuff and while at times he looked to be struggling he managed to keep focused to cross the finish line in pain in a remarkable fifth place. It was a position he accepted as OK at the finish after admitting that he was never comfortable throughout the contest. It was a great performance considering he had had an overnight stay in hospital just six days prior to the race. While finishing fifth may be a disappointment after his National victory Callum managed to stay upbeat especially after hearing that the team had won the team title.

Backing up Callum for a memorable victory were five athletes from five different clubs around the region. After a lean time through injury Carl Smith (Tyne Bridge) showed a return to form after moving steadily through the field to finish in 30th place. Following him across the line two places behind was the find-of-the-season Liam Aldridge of Billingham Marsh House who was making his first appearance in the county team. It was also a first senior appearance for Houghton’s Cameron Allen and he certainly didn’t disappoint with a 34th place finish. While the team lined up with a number of new members, Middlesbrough and Cleveland’s Greg Jayasuriya has been a regular in the squad for a number of years and by finishing in 42nd place and fifth counter he was to mount the top of the podium for a third time. I was nervously counting the runners home waiting for the last scorer to come into view and I hadn’t to wait long for David Green (North Shields Poly) to come into view and while he was outsprinted by a couple of athletes in the run to the line he eventually crossed the mat in an excellent 60th place.

A quick calculation saw the North East close in with a total of 203 points. Was it going to be enough to give the team a medal chance? It certainly was. For within minutes it was announced that in third place was Sussex with 256 points. Second was Yorkshire on 221 points with the NE claiming the title once again after missing out in the previous two years.

While the scoring six did a magnificent job so did the back-up trio of Michael Hedley (Tyne Bridge), Alex Brown (Morpeth) and Gateshead’s Conrad Franks. Michael, in his county debut, finished 97th, Alex, on his senior debut was 122nd while county regular Conrad finished 137th. Just to show how strong the region is at present Houghton’s Luke Pickering, in his first year as a senior, finished in 49th place.

The superb day overall could not have happened if it were not for the tiresome work of the backroom team. Men’s team manager Stewy Bell and his new assistant Albert James were naturally delighted with the day’s results as were women’s team manager Lynn Cooper and her new assistant Bernadette Caygill. Well done to them all and to all the parents and supporters who got behind every NE competitor whether at the sharp end or not. The journey home was a joy after all that and just to add a sprinkling of gold dust to the day Newcastle managed to hammer Southampton for a badly-needed three points!