Roll up, roll up, mud-lovers!


After World War 2, the Northumberland & Durham Paperchase League committee were under pressure to organise an `all-out` race, rather than the handicap league runs, in order to prepare clubs for championship races. Also, an attempt was to make courses `all country` with no road sections. This at the time was difficult, as is the parking issue now. The solution came in the form of a new race the `Sherman Cup`, donated by Sherman Pools. The competition was designed to show a club`s overall strength and initially the Town Moor was the favoured venue. With three to count, the result was decided on a club`s aggregate points over three races, all starting at the same time, the youths ran 1 lap (3 miles), the juniors 2 laps and the seniors 3 laps equating to the favoured championship distance of 9 miles.

The first of these mob runs, as they became known was in January 1949 and after `the Morpeth` on New Years` Day, the Sherman Cup for male runners only was to become the second fixture of the year. Discussion in the early 1950s centred around the introduction of a boys` category, so they would not be lost to other sports and the thinly supported junior age group was questioned as numbers were seriously affected by service conscription. After a trial period when a special boys` race over 2 miles was added to the programme, in 1958, the new age groups of boys, youths and seniors became the norm. Similarly, colts were added in 1970. The growth of the competition is clear in the charts provided, in 1951, 95 in total took part (41 youths, 20 juniors and 34 seniors). In 1968, the best support for a number of years was recorded (147) and with the addition of the colts by 1975 the total finishers had increased to 209.

After two years on the Town Moor (accommodation problems) the venues in the 1950s included Harlow Green (Low Fell), Kenton Moor (Cowgate), the Rising Sun (Wallsend) and Lobley Hill. From 1958, for many years New York became the home of the Sherman Cup, hosted by North Shields Poly. Use of land for industry on the New York site saw a return to the Town Moor from the 1980s, with amongst others Meadowfield and Sunderland also hosting the Sherman Cup. From 2002, Temple Park at South Shields in general has been the chosen location.

Four clubs over the years have dominated the Sherman Cup, Gosforth Harriers were the first winners in 1949 and took the honours nine times up to 1960. 1962 saw Gateshead Harriers put together a run of twelve consecutive victories. Up to 2001, Sunderland Harriers from 1989 had their name engraved on the famous trophy on ten occasions, with Morpeth Harriers clocking up twelve wins in the 21st century. From 2002, the Davison Shield, donated by Pam and Ron Davison has been contested by the fairer sex. Here Morpeth have eleven successes to Gatesheads four, with Gosforth refreshingly adding their name to the trophy in 2016/17. Encouragingly the Gosforth men`s squad were also back amongst the leading teams finishing runners up. Overall Men:

Famous individual winners include Brendan Foster (Youths 1966) and Mike McLeod (Boys 1968). Unlike the team race, individual winners haven’t been as prolific, Brian Rushworth, multi NECAA/NEMAA champions won the Sherman Cup senior race four times between '93 & '03 and Kim Simpson, Sarah Wilkinson & Jane Mooney each have two wins in the Ladies race.  Other notable female winners include Laura Weightman & Aly Dixon.  With the main aim to contest a club`s overall strength the masters` age group has been included in the last few years, with the masters providing a very high proportion of the senior fields.

We have the results from the early 90's available, and following on from the 'Trends in cross country participation' post, we can see an increase in numbers, although not quite on the same scale as the main Harrier League events, and in fact the numbers in the under 15 boys & under 17 men have not been bettered since 1990. 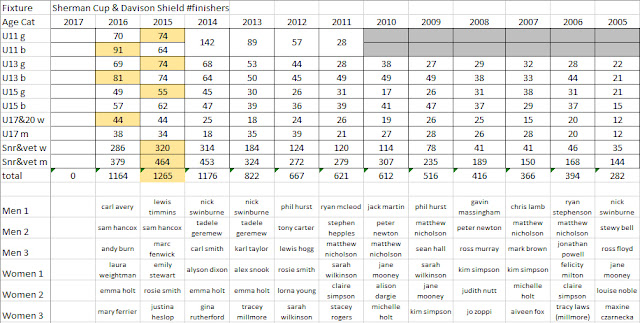 As with previous seasons since 2000, (with the exception of one year when South Shields Harriers were hosting the NECAA XC Champs), the fixture will be held at Temple Park on the 28th of October.

Unlike a regular NEHL fixture, these are scratch races (no handicapped packs) rules:

Davison Shield: This is decided on aggregate team positions over the 5 female categories - U13 Girls, U15 Girls, U20 and U17 Women, Senior Women and Veteran Women - with 3 counting in each category. Senior Women and Veteran Women run at the same time but are scored separately. Athletes registered as Veterans must compete in that section and may not transfer to compete as Seniors. 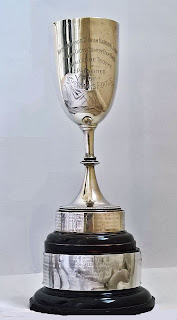 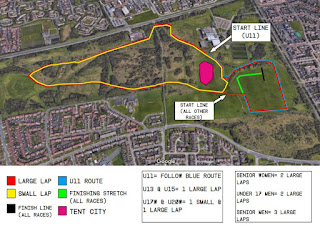 Please use the leisure centre car park, and note that there are parking charges. Pay at reception for a ticket: 70p all day.  Race HQ will be situated between the start & finish in the NEHL tent. 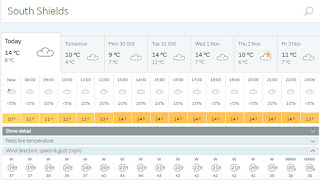 Forecast for South Shields today is most likely dry, but with a very strong westerly wind, 20mph average, with gusts 40+ mph.  Be aware of the wind conditions when you put up your club tents.