WHAT a way to end a special day. Those who made the trip to Nottingham’s Wollaton Park, and there were many athletes and spectators from the North East who did, for the English National Cross-Country Championships were rewarded with one of the finest performances by a local senior athlete for many a year. The last time the region celebrated senior success was in 2001 when World Championship representative and former Chester-le-Street athlete Michael Openshaw claimed the title at Durham running in the colours of Birchfield Harriers. 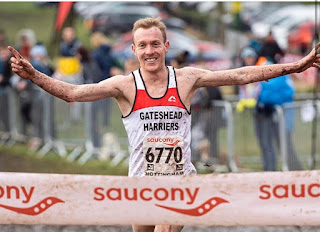 Nineteen years is a long, lean time but it finally came to an end when Calum Johnson, who, incidentally, had to be content with second place in the North Eastern Counties Championships in Alnwick just before Christmas, destroyed the 2,000-strong field after producing a devastating last lap which finally pushed back the last of the challenges.
It was a pleasure to be there as the 25-year-old Gateshead Harrier lifted the treasured trophy adorned with the leading endurance runners’ names from the past, including fellow Gateshead athlete Brendan Foster, who won in 1977 and Elswick Olympic silver medallist Mike McLeod who won two years later.

In pre-race news outlets Johnson didn’t get a mention despite winning the Northern title earlier in the year but he made those writers eat their words as he home to an extremely comfortable 23 seconds victory where, on crossing the line, the smiles on his face quickly disappeared to be replaced by tears of joy! 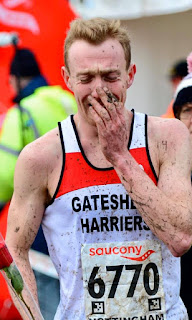 It was certainly a confident Johnson who set off for a tough three circuits of the undulating park covering 12 kilometres which, after the previous nine races, the course was a quagmire and if that wasn’t enough to deter the most hardy, there were strong winds to contend with as well as a huge log placed strategically on the running line to negotiate! 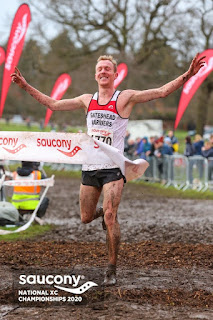 Carl Avery meanwhile started more conservatively and while Johnson was easily recognisable at the front the Morpeth athlete, who had finished in bronze medal position the previous year, was swamped by a huge group outside the top 20. 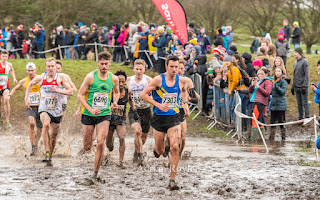 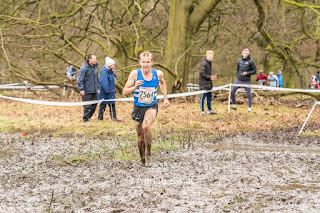 At the completion of the first of the three laps it was Leeds City’s Linton Taylor who was forcing the pace with Johnson and Joe Steward (East Cheshire) tacking every move as Avery had dug in well and had moved through into fourth position, albeit around 20 metres adrift of the leading trio.

As the athletes went out into the country for the penultimate time the Yorkshireman’s front-running tactics began to tell and he quickly became detached leaving Just Johnson and Steward to fight it out over the final circuit.

With Taylor gradually slipping back the incentive for Avery was to close him down and hopefully go on to repeat his third-place finish of last year.

He did close him down gradually but at the same time former champion, Adam Hickey managed to pass him midway through the lap at the point when Johnson also made an early bid for victory.

On the steepest section of the course Johnson made his move and it immediately had the desired effect for Steward couldn’t match the slight injection of pace and within no time he quickly became detached. There were still two kilometres of the contest to go but the tri-athlon specialist certainly wasn’t going to leave anything to chance and so it proved for once he came into site he was well clear and only a mishap would deny him the glory. 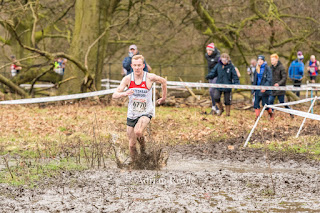 So it was a smiling Tynesider who had eased off slightly in the run to the line who broke the tape, the seventh athlete from the region since the first championship was held way back in 1876.  Saltwell’s Jack Potts set the ball rolling in 1931- he also won in 1936 – followed by Elswick Olympian Alex Burns in 1932. Then it was Foster’s turn (1977), then McLeod (1979) then North East-based Dominic Bannister in 1998 followed by Openshaw and now Johnson.

After his success a tearful Johnson had this to say: "I was really confident going into the race after winning the Northern and the muddy course was certainly to my liking and having run here twice before – he was 12th in 2017 in the senior race and a disappointing fourth in the junior race in 2014 - I had a good idea when to make a move".

“And I have to say the plan worked a dream. I knew I had beaten both Joe and Linton in the Northern’s so I was certainly confident of having the beatings of them again but I wasn’t going to leave it to the last minute and on the second lap I felt I was stronger that Joe on the steep hill at the back of the course so I decided to go then on the final lap. I didn’t push on really quickly but still managed to ease away which is a wonderful feeling knowing that baring an accident victory was in my hands".

At that stage the biggest problem I had was weaving through the lapped runners for everyone was looking for the best surface which made it extremely difficult but you just had to concentrate and make sure there were no mishaps. I hadn’t looked behind once even though I was getting lots of feedback and lots of support and when Barry Maskell shouted out that I was well clear I did glance behind as I entered the finishing straight just in case he was giving me duff gen and it was then that I knew that I could relax and enjoy the closing stages without any pressure!’’

At the finish zone on the other side of the barriers Johnson quickly met up with mum Heather – more tears – dad Alan, brother Daniel and Maskell and it was a very happy group who eventually made it’s way to the presentation tent.

It was certainly the best way to end a long day of action for Johnson’s gold medal was only the North East’s second award after Birtley’s Chris Perkins had finished in third place in the under-15 boys event, a race which saw the Northern champion push the pace on from the off. In that contest North Shields Poly’s Josh Blevins showed a return to form to finish in ninth position and though the rest of the results for the North East weren’t top drawer the experience gained will do those who lined up the power of good for the future. 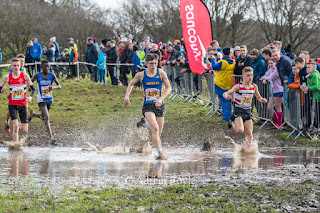 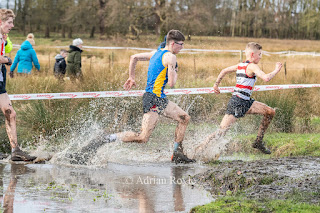 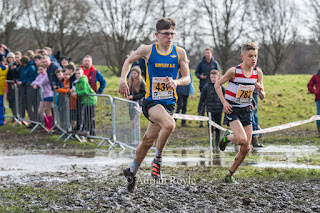 *I travelled to the National courtesy of North Shields Poly for which I am truly grateful. They were a great bunch to be with and, of course, not a pick of bother which of course as it should be!