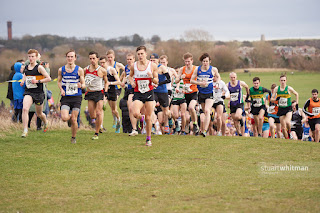 Once again organised superbly by South Shields Harriers at Temple Park, a strong Morpeth outfit claimed the Sherman for a record 24 times – 10 in a row - and surpassing Gateshead’s 23 victories, while Newcastle outfit Tyne Bridge celebrated lifting the Davison Shield for the first time due to lining up as many females’ as possible.

Morpeth, with two team successes out of the five age groups led Elswick by seven points with Gosforth finishing in third place a further nine points adrift while Tyne Bridge, who didn’t come out on top in either of the five races, were the only club to close-in teams in all five contests.

Individually, Morpeth’s Matthew Briggs was a comfortable winner of the senior men’s race with Conrad Franks (Gateshead) finishing strongly to claim the runners-up award ahead of Sunderland’s Stephen Jackson.

Birtley’s Chris Perkins ended his cross-country campaign with a front-running victory in the under-17 men’s contest finishing ahead of Bertie Marr (Morpeth) and Jarrow and Hebburn’s Joshua McKenny.

Morpeth’s Joseph Close had three seconds in hand over North Shields Poly’s Ben Sproats in the under-15 contest with Oliver Tomlinson, also Morpeth, completing the one-two-three.

In the under-13 event, Freddie Palmer (Tyne Bridge) took the honours ahead of Blaydon’s Finn Graham and Birtley’s Callum Bailey.

In the senior women’s race it was a repeat of two years ago with Elswick’s Amy Fuller claiming victory relegating Catriona MacDonald into second place with early leader Kim Simpson (Gateshead), runner-up the previous weekend in the North East Masters XC Championships, finishing in third spot.

It was a Houghton one-two in the combined under-17/20 event with victory going to the in-form Eva Hardie who had a 15-second cushion at the line over team-mate Anna Pigford with Birtley’s Katie Francis, the first under-17, completing the medallists.

It was also a one-two in the under-13 event with North Shields Poly duo Katy Otterson and Anna Johnson finishing ahead of Durham City’s Grace Carter.

Once again a “Try Cross-Country” for under-11s opened the day’s proceedings and over 100 youngsters took part despite the near gale-force winds.

Birtley’s youngsters were again in full flow with Ed Moon winning the boys event and Olivia Murphy coming out on top in the girls’ contest.

Allerton’s James Troop, one of a number of competitors from the North Yorks’ and South Durham League who made the trip to contest the NEHL 125th anniversary, finished in second place ahead of Elswick’s Nicholas Surtees-Brown while in the girls contest Gateshead’s Emma Blackburn finished runner-up just ahead of Alnwick’s Alicia Purvis.

**IT was a superb day’s competition and a huge thanks goes out to the South Shields club from the NEHL for their excellent organisation, not just in erecting the course and supplying the enthusiastic marshals – especially the car park attendants – but giving nearly 1,000 competitors a great day’s sport and to all the officials who resolutely stood their ground throughout the windy day.

The curtain comes down with the final fixture at Alnwick Pastures on March 5.