I FOUND this race report from the English National Cross-Country Championships held on Town Moor on Saturday, March 1, 1986.

Make of the attempted Geordie dialect what you will!

THE ninety-ninth English Cross-Country Championships took place at Town Moor in Newcastle, this was the first time Newcastle had hosted the race, Provincial Insurance continued their support of the event. The programme contained a good Geordie welcome from the president M. Fraser of Darlington Harriers. 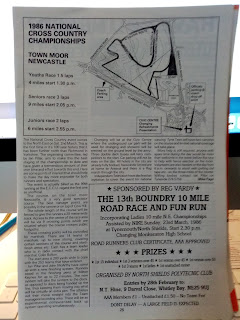 Us Geordie Hinnies want to say: ‘Howway aall ye lads, gan tappy lapy up the banks, but divvent cowp ya creels in the darts.’

Roughly translated means: ‘The local inhabitants would like to welcome all you chaps, to hope that you will not find the gradients excessive, and bid you take care lest you fall in the muddy ground.’

The course consisted of three laps of approximately three miles plus the start and finish straights and was nine miles in total.

The reigning champion, David Lewis (Rossendale) was a notable absentee, Tim Hutchings (Crawley) spent the week in Newcastle acclimatising and felt poised before the race saying: ‘I’m reasonably confident about Saturday, I’ve been very pleased with my three runs on the Continent and I really should have won in Paris. I feel I’m back to my best now.’

The course was challenging as it was covered with snow and ice undulating and there was also a cold wind blowing across the moor. After a mile when the initial stampede had begun to stretch out, the leading pack consisted of Mike McLeod (Elswick), Clarke, Hutchings, Tony Milovsorov (Tipton), Roger Hackney (Aldershot, Farnham and District) and Neil Tennant (Luton United).

The two main hills on each lap had an impact of the leading runners. Hutchings was coping with them admirably and when the runners started the second circuit Hutchings had a 40 metre advantage over Clarke with Tennant, McLeod and Steve Binns (Bingley), Hackney, Martin and Miovsorov in pursuit. Hutchings continued to dominate throughout the lap, and Clarke increased the gap on the chasing pack.

On the last lap Hutchings made the going look ease with a masterful execution of cross-country running, Clarke continued to chase and Martin overcame the challenge of McLeod, Binns and Tennant to move into third, Hutchings went onto to win by 34 seconds in 47:25, silver went to Clarke and bronze to Martin. McLeod won the battle fourth place.

In the team race Milovsorov led Tipton to victory with their six counters placing inside the top 79, this gave Tipton a 156-point win over Basildon with the Wolverhampton and Bilston team picking up the bronze medals.

The 26-year-old Hutchings said: ‘It wasn’t a traditional cross-country course. Had it been drier, it would have been a very, very fast, flat course, with just that one hill really. The second hill was negligible because you came down off the first one so fast, but it was a tough course because of the conditions and I can’t complain about that.’

Tim derived more satisfaction than his first win in 1983 saying: ‘I’m more aware of what’s going on now in the sport, especially after having such a bad year last year. Just about everybody was running apart from Dave Lewis.’

**THE 54th ladies National was held earlier on February 2 at Western Park, Leicester and was won by Carole Bradford (Clevedon) with Jane Shields (Sheffield) second and Julie Laughton (Derby Ladies).

The North East charge was led by Blaydon’s Jill Hunter who finished in 23rd place. Christina Boxer, who later linked up with Gateshead, finished seventh.