From the archives of Bill McGuirk:  Article by Alan Dobison, 1986

After the South Shields disqualifications you would have thought that clubs would have double-checked that their athletes were correctly packed.  But no!  Almost all of the spectators at Chester-le-Street knew that Alan Lamb, winner of the Cockermouth Marathon, should have been in the fast pack.  The inevitable happened, Alan was disqualified and his afternoon ruined.

No-one can blame the officials, John Keefe and his volunteers have enough to do and they manage magnificently without the added burden of such basic inefficiencies.

More to follow: Willie Watson, in second place, was also disqualified.  Willie, a former Elswick Harrier, recently moved to Washington and joined that club - therefore had not completed his nine month suspension.  However , one wonders why Willie should have to serve one at all since his move was over a considerable distance (first claim committees please note).

The eventual winner was an embarrassed John Renney, who thought he had finished 3rd.  John, like Ritchie Ogle at South Shields, has been around a fair time for an 18 year old.  Gateshead easily took the team honors.

Rob Draper from Chester-le-Street took the honors in the Boys race from an unknown Crook athlete, who wasn't registered.  The club officials disappeared before a name could be supplied.

Morpeth swept the board in the Youths' event.  Kirk Groundwater finished a winner with Stephen Priest the fastest, and the club took the team honors.

What a day for the Priest family! Tony was fastest in the Youths' event and sister Susan was second behind Karen Foster in the Girls' race.  Where does Mrs. Priest put all the trophies?

Lisa Reilly must frighten our intermediate Ladies to death.  Only six turned out at South Shields and even fewer - five - at Chester-le-Street.  Come on Girls!  You never know until you try! 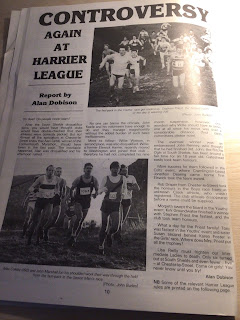