THE region's athletes were in excellent form at the Northern Athletics Cross-Country Championships were four individual gold and one silver medal together with two sets of gold, one set of silver and two sets of bronze team awards were the order of the day which topped the results of any of the other competing counties.

The championships returned to Pontefract Racecourse after an absence of four years and conditions couldn't have been better which was a bonus for the 300 plus competitors who traveled down the A1 to the Yorkshire venue.

The North East got off to a blistering start with Darlington's India Pentland, the North Eastern Counties champion, winning the under-17 women's 5k, the opening event on the 10-race programme.

After the initial charge India only had Yorkshire champion Esther Rowe-Towle for company entering the final kilometre but the NE champion proved the stronger before encountering a stiff, short hill leading into the long finishing straight by which point she had opened up a sizeable lead which she extended to eight seconds by the finishing line.

Rowe-Towle (City of Sheffield and Dearne) came home a comfortable second with Vale Royal's Holly Smith completing the one-two-three.
It was a smiling India who commented after receiving her gold medal that she was thoroughly pleased with her performance and that she really enjoyed the course. 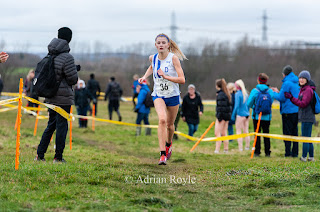 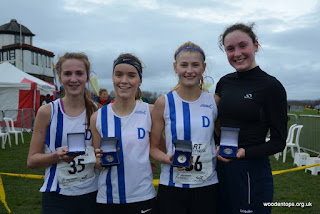 In a quick turnaround India was back in the presentation area this time to receive a team silver medal together with team-mates Catherine Roberts (16th), Elena Phillips (50th) Megan Noble who finished 82nd.

As well as the medalists there were numerous other eye-catching performances including Morpeth's Holly Peck, who finished 12th; Gosforth's Rebecca Wren who was 19th and Chloe Wellings (Gateshead) who was 28th.

Next up was the junior women's 5.7k event and Birtley's Kate Waugh came perilously close to making it to the presentation ceremony. Unfortunately, Kate, who now is one the UK's leading tri-athletes, just missed out after finishing in fourth place.

Kate, who has a remarkable record in the Northern having won the under-13 in 2012; under-15 in 2014 and the under-17 in 2017, was having her first outing over the country since 2017 but despite that it was a gutsy performance after being in a medal position up until the half-way point.

The under-13 girls contest over an extended 3k had a line-up of over 200 with 25 competitors representing North East clubs.  And while individual medals were hard to come by Middlesbrough Mandale had plenty to cheer about as they came out on top in the team section. 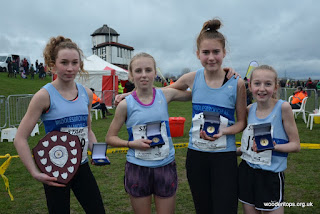 The Teessiders were led home by Eden Creasey in fifth place with Zoe Hill (10th), Isabel Herbert (13th) and Emma McNeil backing her up to a gold medal total 50 points, well clear of Rotherham on 103 and Stockport on 129. Blackhill Bounders, led by Hannah Bowyer in 26th place, were the only other NE club to close in, finishing in 19th place.

The under-17 men's 6.37k championship was next to get underway and it proved profitable for the region with Wallsend's Sam Charlton taking the title and Morpeth winning the team section.  Charlton, the NE champion, was always in control as he tracked the leaders in the early stages before making his bid for glory midway through the second of two undulating circuits of the racecourse. 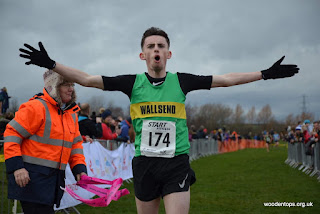 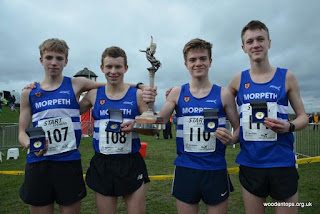 Gateshead's Charlie McMillan continued his run of improved form to finish in 11th spot with Ross Charlton next athlete from the region in 14th place leading Morpeth to receive the team honours.

Others who figured in the top 50 were Houghton's Henry Johnson, who was 17th, Middlesbrough Mandale's Jake Creasey and Archie Lowe who were 20th and 36th respectively; Tynedale's England 800 metres champion Dan Joyce (44th) and Darlington's Daniel Boyer, who was 45th.

The under-13 boys contest over 3k took the programme to the half-way stage and while the NE missed out on medals there were still plenty to be pleased with.  In a field over over 200 competitors, the region had nine finishers inside the top 40 with Houghton's Brandon Pye leading them home in sixth place followed closely by Gosforth's Ethan Bond one place behind.

In the team stakes Darlington finished 10th with 237 points and New Marske 15th with 354 points.

Over 200 competitors lined up for the under-15 girls 4k championship with the region well represented by around 40 competitors.

Unfortunately, no one managed to make it onto the podium but, nevertheless, there were still many impressive performances to savour.

Alnwick's Millie Breeze excelled to finish in sixth position, just 10 seconds outside a medal place. Millie was quickly followed across the line by Gateshead's Ines Curran, who was eighth; Birtley's katie Francis in 11th spot and Chester-le-Street's Emily Chong, who was 13th.

The under-15 boys championship was also over a distance of 4k and once again, despite some impressive performances, there were no podium placings.

The under-20 men's championship was next up and it proved a superb triumph for Morpeth's European Championship representative Rory Leonard.

Rory went into the contest as one of the youngest having won the under-17 title 12 months previously. However, it was an old head on a young body that came through strongly to win the 8k championship.

The Northumbrian settled into the leading pack before stamping his authority on the race midway through the second of two circuits.

At the finish 10 seconds was the winning margin with Yorkshire champion Euan Brennan (Ilkley) finishing in second place and Preston's Nathan Dunn completing the medallists.

After crossing the line Rory confessed that it was the most comfortable he had ever felt in a race.

Rory's Morpeth team-mate Alex Brown was next home for the North East finishing seventh, one place ahead of Houghton's Cameron Allen and four places ahead of fellow Morpeth Harrier Kieran Hedley.  Durham City's Luke Pickering was next home in 28th place. 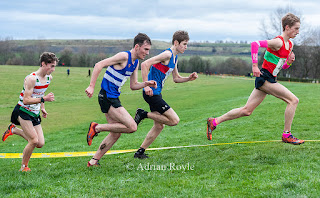 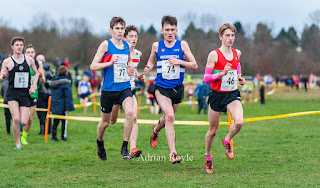 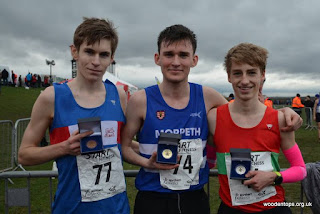 Unfortunately, in the team stakes Morpeth missed out on a medal by the virtue of only having three runners in the four-to-score contest which left Preston, the only club with four athletes, to claim the gold medals.

The penultimate race on the programme was the senior women's championship over the same 8k distance as the junior men and Morpeth were hopeful that Mhairi Maclennan could retain her title that she won 2 months earlier.
It turned out to be a thriller worthy of a championship with a gusty performance if ever there was one by Edinburgh-based Maclennan.

The Scotland-born athlete knew she had been in a battle as she managed to get away from her main rivals in the final 500 metres to come home four seconds clear of Leigh's Lauren Heyes (formerly Howarth) with Blackburn's Jessica Judd, making her debut in the Northern Championships, finishing third a further eight seconds back.
A tired, but jubilant Mhairi confessed after crossing the line it was much tougher race than she had encounter the previous year at Harewood House, Leeds.

Morpeth, with 61st laced Gemma Floyd backing up Maclennan, Holt and Macdonald, finished in bronze medal position in the team section behind Leeds City and Rotherham. 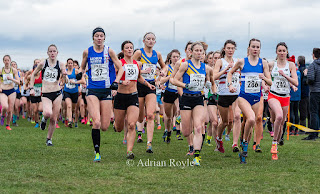 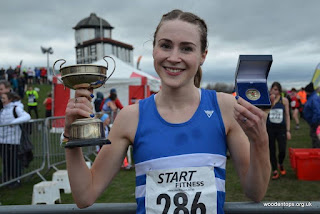 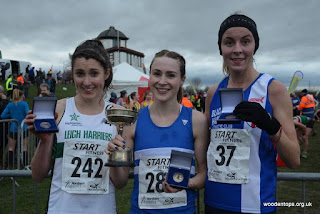 With dark clouds overhead the final event of the day, the senior men's 12k contest got underway and again another Morpeth athlete went into the contest as the defending champion.

Carl Avery was determined not to let his title go without a fight and he did his utmost to hang onto his crown.
However, he found one athlete just as determined to claim the gold medal on this occasion and try as he may he just could see off the challenge of Leeds City's Emile Cairess who was having his first taste of senior competition after winning the under-20 championship 12 months earlier.

After the initial charge which saw over 700 face the starter, Carl was quickly in contention and as the race unfolded he and the Yorkshireman were battling it out at the head of affairs.  However, it was the younger Cairess who proved the stronger in the closing stages getting away with the finish line in sight to come home nine seconds clear of the the Northumbrian.

It was a superb contest but on this occasion Avery had to give way to a better athlete on the day but despite that he was still upbeat after moving through to collect his medal.

"There's no doubt he is a talented athlete,'' said Carl before adding, "but I'm still happy with my run though slightly disappointed not to retain my title.'' 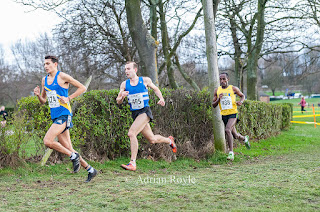 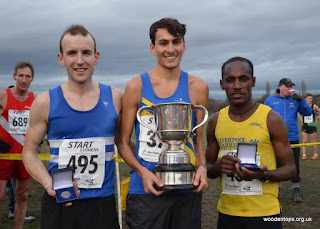 County champion Greg Jayasuriya (Middlesbrough and Cleveland)  was next home for the region in 23rd place closely followed by fit again Carl Smith of Tyne Bridge.


Congratulations to all the region's athletes who made the trip, whether a medalist or not, taking part in the regional championships is something to be proud of. Well done and good luck to those who will be heading back to Yorkshire in three weeks time to take in the National Championships!
ROLL OF HONOUR
Individual gold
Senior Women: Mhari Maclennan (Morpeth)
Under-17 Women: India Pentland (Darlington)
Under-20 Men: Rory Leonard (Morpeth)
Under-17 Men: Sam Charlton (Wallsend)
Individual silver
Senior Men: Carl Avery (Morpeth)
Team gold
Under-13 Girls: Middlesbrough Mandale
Under-17 Men: Morpeth
Team silver
Under-17 Women: Darlington
Team bronze
Senior Women: Morpeth