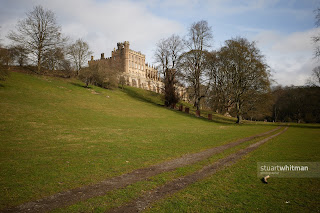 DESPITE the attraction of a new venue numbers were significantly down for the re-arranged Start Fitness North East Harrier League fixture at Lambton Castle. There were a number of reasons for that, however, but for those who did manage to make it to the grounds of the former Lion Park, by all accounts they enjoyed it immensely and they can’t wait for next season and a repeat performance. The Washington, Low Fell and Birtley clubs were the hosts manning their posts throughout the day while John Stephens and his team, together with the landowners, had produced a ‘challenging’ course, on all accounts, a true cross-country test. Thanks indeed go to the landowners in ensuring that the NEHL could at least boast five fixtures during a difficult season for all concerned - BillMcG

SENIOR MEN (11.1km)
SUNDERLAND’S Liam Taylor set out his stall from the off and by the end of the first of three testing circuits that included a never-ending steep hill, he had opened up a near two-minute advantage over his near 370 rivals. After joining Taylor in the opening surge Sparrow Morley (Tyne Bridge) dropped back to lead the chasing pack in second place as the duo took advantage of a 2min 35sec and 5min 15sec start over the medium and fast packs respectively. 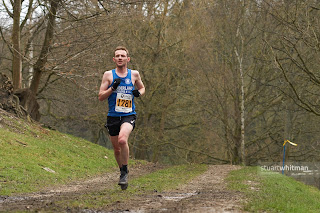 When Taylor came into view a second time he still held a comfortable lead as Houghton’s Luke Pickering, running from the medium pack, had moved through into second place.  By now the field was bunching up as fast pack runners Chris Larkin (Newcastle University, who finished in second place in the previous fixture in Alnwick, and Gateshead’s Conrad Franks, Stephen Jackson (Elvet) and leading over-40, Darren Purvis (Birtley) were all cutting through the opposition. 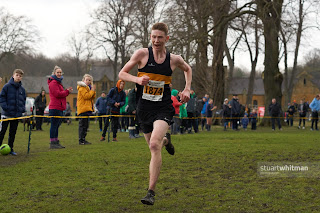 Entering the finishing straight after a gruelling contest, it wasn’t surprising that Taylor appeared first but, despite Pickering momentarily taking a wrong turning, Taylor’s advantage was quickly being eroded. However, Taylor, glanced behind to see the danger and managed to hold off his younger challenger with four seconds to spare at the finish line. It could be said that the Wearsider had eased off slightly during the final circuit but the performance by his younger rival was the one to appreciate.

Posting the overall fastest time of the day it didn’t come as a surprise for he had ran really well in the Inter-Counties XC the previous weekend when, not representing the North East, managed to finish ahead of two of the county’s scorers!

Alex Mirley (Elvet Striders) was third man home while Larkin, followed by Franks, were the next quickest behind Pickering after working their way through to finish fourth and sixth respectively. Taylor led Sunderland to team victory who now head the table by four points from Elvet with Blaydon in third place. Birtley lead Division Two ahead of Gosforth and Ponteland while the Division Three leaders are Jesmond who lead Saltwell and Tynedale. 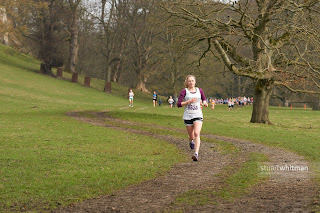 FORMER Lincoln Wellington athlete Libbie Read made her harrier league debut a winning one. Running in Heaton Harrier’s colours for only the second time – she finished 151st in the National – Libbie spread-eagled the near 250-strong field from the off and at the halfway point had close on a two-minute advantage over fellow Heaton athlete, Laura Smith, Sarah Wharton (Tyne Bridge) and Ponteland’s Sarah Bell. Taking full advantage of the 2:25 and 5:15 over the medium and fast pack runners, Libbie still had a substantial lead as she entered the finishing straight. Claire Davies (Stocksfield Striders) running from the mediums, finished runner-up while another Heaton runner, Danielle Smythe, claimed the third place award after seeing off her fast pack rival Jane Hodgson (Morpeth) after the pair had locked horns throughout in their bid to post the overall fastest time. 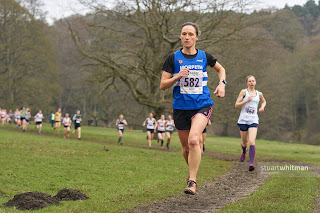 Posting the third fastest time was Saltwell’s Gemma Bradley. Tyne Bridge, led home by Sarah Wharton, won the Division One team-race and now top the table ahead of Morpeth; Wallsend lead Division Two from Jesmond while the Division Three leaders are Claremont who lead from Jarrow and Hebburn and Ponteland.

UNDER-17 MEN (4.7km)
IT WAS South Shields who were celebrating after Ryan Stewart came home 19 seconds clear of Elswick’s Keiron Dixon with Sunderland’s Rhys Clark completing the one-two-three. Fastest on the course was Alnwick’s Oliver Telfer, who worked his way through the field to finish in fifth place from a handicap of 2:35, was the fastest on view with Morpeth’s Euan Duffin second quickest. With so many athletes in this age group away competing in the English Schools’ XC Championships it wasn’t surprising that no clubs managed to field three counters. 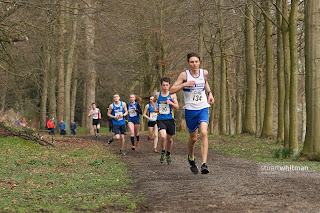 UNDER-20/17 WOMEN (4.7km)
SOUTH Shields were celebrating a second time when Emma White came home over a minute clear of Gosforth’s Amy Ellis with Birtley’s Amy Drummond finishing in third place. Emma, running from the slow pack, was also the fastest overall with Birtley’s Eve Southern, working her way through to fourth place from a handicap of 1:20, second quickest. Like the men’s age group, no team closed in. 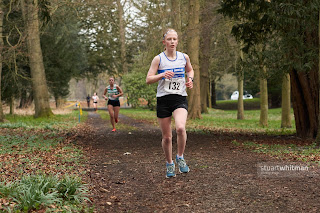 UNDER-15 BOYS (3.7km)
SUNDERLAND’S Adam Hughes held on by five seconds to see off the challenge of Morpeth’s Bertie Marr who had worked his way through to second place from a 1:45 penalty. Ben Weston (South Shields) finished in third place ahead of Morpeth’s Sam Tate who posted the second fastest time behind his Morpeth team-mate. Morpeth, with Liam Roche backing up Marr and Tate, won the team race finishing with 15 points, four less than Sunderland. 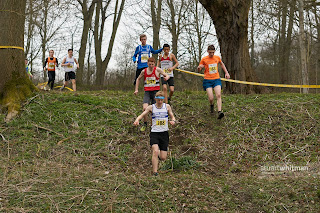 UNDER-15 GIRLS (3.7km)
ANNA DORMAN (Tyne Bridge) was the star after leading throughout the contest. Caitlin Flanagan (Morpeth) finished runner-up, eight seconds behind the leader with Gosforth’s Evie Hutchinson, a similar distance adrift in third place. Fastest on the course was Blackhill’s Alix Walton who worked her way through to fifth place from a 1:45 penalty. Blackhill were comfortable team winners ahead of Gosforth and Elswick. 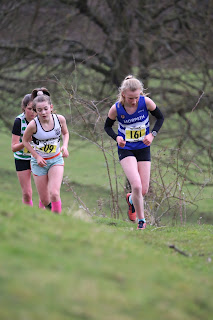 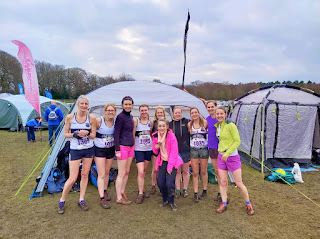 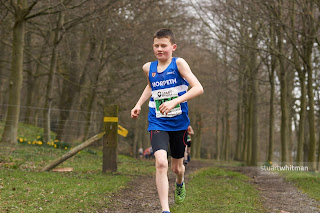 UNDER-13 GIRLS (3.7km)
GATESHEAD’S Iona Johnstone led all the way to break the tape ahead of fast pack pair Hannah Wightman (Gosforth) and Jarrow and Hebburn’s Darcy Tullis. At the line Iona had 42-second cushion over her nearest rival. Hannah led Gosforth to a comfortable team victory with Jarrow and Hebburn second and Gateshead third. 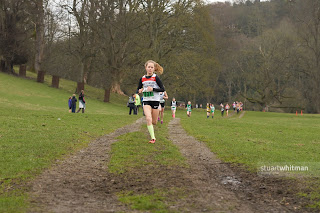 UNDER-11 Boys (2km)
IT WAS a Gateshead one-two in an impressive field of 58. Victory went to Alex Lienard who crossed the line 15 seconds clear of Harry Garrett with Morpeth’s Rob Walton claiming third place a further six seconds behind. A total of 23 of the region’s clubs had representatives in the contest while Newcastle’s West Jesmond Junior School also had a number on the start line. 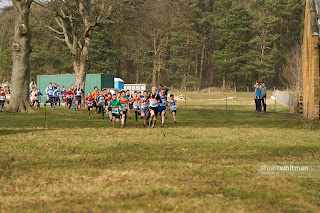 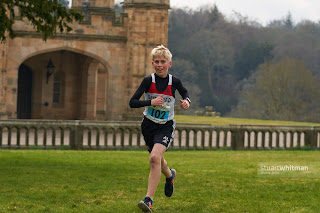 UNDER-11 GIRLS (2km)
DERWENT Valley Trail Runners’ Niamh Phillipson came out on top after showing a huge improvement after finishing in 10th place in the opening fixture in Wrekenton. Grace Carter (Durham City), a winner at Aykley Heads in November, finished runner-up with Millie Slane (Blackhill) claiming the third-place medal. 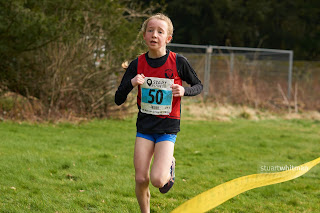 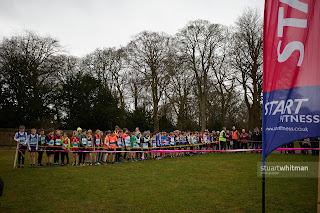 *WELL done to everyone who turned out, the new venue proved extremely popular with competitors and spectators alike. Thanks once again go to all the marshalls, technical officials and the league committee who have managed to overcome numerous problems throughout the season to give everyone a superb day’s sport.